The orange-in-a-glass effect (OIG) is when one's breasts are the same volume as a bra cup, but the cup is too narrow and deep for one's breast shape, "like an orange that doesn't fit into a narrow glass".[1] This will make the cup size look empty, wrinkly, and all-around too large, when, in actuality, it is either too small or simply the wrong shape.[1]

If underwire does not fully encase your breast tissue, width-wise, you compromise both support and shape, and you can have health issues, such as pain, blocked milk ducts, and breast inflammation, especially when nursing.[1]

There are several signs of having the OIG effect:

The opposite can also occur, where one's breast shape is narrow and deep, and a particular cup is too wide and shallow. This has been nick-named the "aubergine-in-a-bowl" effect.[1] 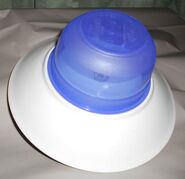 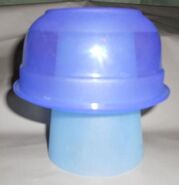 Opposite OIG effect
Add a photo to this gallery

Retrieved from "https://bustyresources.fandom.com/wiki/Orange-in-a-glass_effect?oldid=9936"
Community content is available under CC-BY-SA unless otherwise noted.